“Every day I feel is a blessing from God. And I consider it a new beginning. Yeah, everything is beautiful.”

I’m not going to talk about his accomplishments or his life story – there are enough people talking about Prince’s life if you’re interested in the details behind the greatness of this 5’2″ legend in high heel boots. I will say Prince was a vegetarian and a teetotaler, a musical genius and a true role model of positivity.

Today, I’m going to talk about how Prince shaped, touched and inspired my life. After all, music, and art in general is about how it affects the spirit of the individual.

I first heard the song 1999 when I was 13 years old. The song went platinum, and it was then, in 1982, that I started to imagine what life would be like in the year 2000, although it was still a lifetime away. One thing was for sure, I knew then that this song would be the anthem of a New Year’s Eve that was still 17 years down the road. And when I sang along with Little Red Corvette, it conjured up images of a pocket full of horses, little did I know what Trojan meant at the time.

A couple of years later, in 1984, Purple Rain the album and the movie were released. I was too young to understand all the subtle undertones and nuances of the film at the time, but I was instantly mesmerized by the movie, the man and the music. If you knew me in high school, then you knew I planned to marry him one day.

Prince’s impact on my love life didn’t end with an adolescent girl’s dreams of marrying a rock star. He was right there with me when I met my first love, who I started dating around the time Raspberry Beret was my number one rewind song of the day. Aside from the fact that my boyfriend was a Prince doppelgänger at the time, we shared a passion for his music, which we listened to ad nauseam together.

Erotic City was one of the first digital tracks I ever got – I was so excited to get my hands on an almost 8-minute unedited version of this song that I’d played so many times that it is forever etched in the seams of my soul. I remember when it was first released in the mid ’80’s, it was banned from the radio and hard to get a copy of. Somehow, we got our hands on a bootlegged version, and I made a 90-minute cassette tape of it so I didn’t have to keep rewinding it. I listened to that cassette tape exclusively on my 6-hour drives back and forth from my hometown to university many times. And speaking of which, when I went away to school in 1987, Sign “☮” the Times came right along with me to every party, night club and even to the library on my walkman.

Prince stayed with me throughout my university days, and moved right along with me into adulthood. He was there with me in romance, making me feel like The Most Beautiful Girl in the World, and his music was often the elixir I needed to get the pep back in my step when I was feeling down. His lyrics would uplift me when nothing else would do the trick, and his sound made me want to go crazy and dance like a maniac.

I can’t think of a single period of my life that some Prince song is not linked to. He’s been with me through adolescence, first love, becoming an adult, loss, sorrow, celebration and everything in between.

Every so often, someone comes along who leaves an indelible mark on the world – they are the ones who let their light shine with reckless abandon.

If you were old enough to celebrate the ringing in of the new millennium, then you remember, no matter where you were at midnight on December 31, 1999, whether you were in Mumbai, Jakarta, New York, Milan, Toronto, or in your living room anywhere in the world, you were more than likely listening to 1999.

Prince was full of surprises. He was a big Zooey Deschanel fan, and I remember freaking out when I found out that he was going to make an appearance on an episode of one of my shows, New Girl in February 2014, where he debuted Fallinlove2nite, my instant new favorite song. Here’s a clip from the episode:

Even now as I replay the clip, my head starts bobbing, my lips curve up into an uncontrollable smile, my body starts to move and my soul literally awakens with joy. That’s the impact of Prince. He spoke to my soul. And I’m sure many of you feel the same way because the world is reacting to this news today like no other.

Prince lived life on his own terms, he didn’t try to fit in or conform, he just did what he loved, and the world went crazy for him. Who else can call themselves a symbol and be so widely accepted? Not many. He saw the world for all it’s beauty, and it was reflected in his lyrics. His lyrics had an inspiring message of positivity – to live life, to enjoy it, to make the most of each day, because tomorrow is not promised. That’s gratitude in action.

I think the greatest impact he had on my life was one that I didn’t realize until today. His lyrics, that I’ve been listening to for 34 years might have helped to inspire me to be positive. This is what he said to that star-struck, wide-eyed, adoring young woman all those years ago, he said: let’s go crazy, let’s live life. He told me to reach for new heights when I felt like life sucked…he said:

And if the elevator tries to bring you down
Go crazy, punch a higher floor

My dearly beloved Prince, you graced the world with your brilliantly shining light, and for that I am so grateful. You’ve left your imprint on the hearts of the Universe, forever to be celebrated in your memory. Rest In Peace, my friend. You will be missed beyond measure. 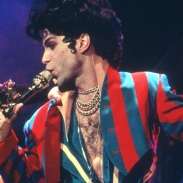 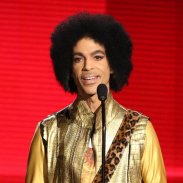 When life gets you down, think about this 5’2″ giant and Punch a Higher Floor!

7 thoughts on “Punch a Higher Floor”