I flipped the vegan switch on January 1st. It’s veganuary, so it’s a good time to go vegan. For the last year I have barely eaten any meat, so a few months ago, I decided to become vegetarian. That wasn’t so difficult. I miss the occasional juicy steak, but I can live without it. Growing up eating Indian food and knowing how to make amazing meals with vegetables makes it easier.

A couple of months ago, I came across an article on how cows are treated on dairy farms. I was so saddened that I cried. I decided to stop eating dairy right then.

“Be the change that you wish to see in the world.”

Becoming vegan didn’t sound like it would be a big deal – I’ve already been drinking almond milk for several years now, I don’t have yogurt or sour cream very often, and I’m not a huge cheese person. So I thought. Surprisingly, cheese wasn’t so easy to give up. Although I don’t eat cheese that often, I do have feta in my greek salad, which I really enjoy, and of course, there’s pizza. Ah, pizza. So, for a while I was content with being veganesque, allowing for my two indulgences. I didn’t feel right about it, but the thought of vegan cheese just wasn’t appealing.

My friend Kim helps out The Sanctuary at Soledad Goats. They provide a safe home for rescue animals, and I try to offer my support through donation whenever I can. The founders of the sanctuary are goat cheese makers gone vegan. I was curious about their cheese, but a bit too apprehensive to buy some – I have never tried vegan cheese before and I didn’t want to buy it and then throw it away if it was horrible. On New Year’s eve, Kim posted on Facebook that there was a promotion on their cheese, and that it was delicious. Kim was my roommate in college, so I know her taste in food and I have similar tastes, so I thought I’d give it a try. The cheese arrived a few days later in a carefully packaged insulated foam cooler, with a lovely hand written note: Dear Rajni, thank you so much for your order…your purchase allows us to continue to rescue more afraid and unwanted animals. Thank you again for your support.

It feels good to support such a great cause. It feels very positive. It doesn’t even matter if I don’t like the cheese, it’s still worth it! And it turns out, I love their cheeze!!!! They make a variety of cheezes in a bunch of different flavors. 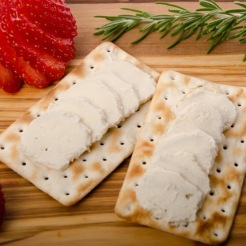 Like I said, this is my first experience with vegan cheese, and I’m pleasantly surprised. I wouldn’t call it cheese, at least not hard cheese like we’re used to, but more like a soft spreadable cheese. I haven’t explored all the ways I can use it yet – so far, I’ve had a grilled cheese sandwich, cheese & crackers, and some parmesan sprinkled on vegetarian chili. I can tell you that it makes me happy to eat this cheese, not only because it tastes good, but because it’s not hurting any animals. And you know what happens when you put feel good vibes out into the universe? You get more back.

So now, I’m vegan. I put my desire to be vegan out to the universe, and it has materialized.

The way the universe works is so subtle that when your desire shows up, it is so natural that you don’t even realize that you actually created it with your own thoughts.

Being vegan makes me very happy, it makes me feel good. And if my small contribution helps to keep these little cuties safe and happy, I’m over the moon! 🙂

3 thoughts on “For The Love Of Goats”