“I believe in wishes and in a person’s ability to make a wish come true, I really do. And a wish is more than a wish… it’s a goal that your conscious and subconscious [mind] can help make reality.”

I watched Spike Lee’s 2016 documentary, Michael Jackson’s Journey from Motown to Off The Wall last night, and it took me down memory lane.

It was the fall of 1984; I wasn’t quite 16 years old yet. I just found out that Michael Jackson and all of the Jackson brothers were coming to Montreal on their Victory Tour. Montreal was about an hour and a half away, and I knew I would never be allowed to go with my friends on my own. If I was allowed to go, how would I get tickets – I’d be in school when they went on sale. Even though Thriller came out two years earlier, it was still at the top of the charts, and concert tickets would be sold out almost as soon as they went on sale. I needed a plan, and fast.

My sisters. Yes, I’d go with them. So, I got my older sisters and some of their friends on board. The plan was to load up a friend’s van and take me to that concert! Of course, I also begged them to stand in line for hours the day tickets went on sale to seal the deal. #thankyouBoba

The day finally arrived. We were all set – seven tickets to what-I-now-know-to-be-the-concert-of-a-lifetime (it was the first and only tour with all six Jackson brothers); my own home-made glitter glove; a van full of gas, and a green light from the parental units. We headed towards what was to be the most magical night of my life up until that point. And it was for my 15-year old self.

Midway through the concert, one of my sisters and I decided to find our way to general admission so we could get up close and personal with the Jacksons. After running down three flights of stairs and halfway around the stadium, dodging security, and pushing our way through the crowds, we made it to the stage just as one of my favorites started to play. The lights went dim, the crowds disappeared, my head spun with dizzy giddiness, and Michael sang Rock With You to me. Just me.

It was magical. I could feel the energy pulsing through the air. Little did I know all that went into the manifestation of all that star power – it would be a long time before I learned about the power of believing, but Michael already knew the secret.

It’s not surprising that successful people consciously or unconscious create their dreams by believing in their ability to succeed, so it’s no shocker that Michael believed that he’d reach the success he set out to achieve, but what I learned from Spike Lee’s documentary the other night blew me away.

On November 6, 1979, before Off The Wall, and years before Thriller, Michael wrote this note to himself:

“MJ will be my new name. No more Micahel Jackson. I want a whole new character, a whole new look, I should be a totally different person. People should never think of me as the kid who sang ABC / I Want You Back. I should be a new incredible actor, singer, dancer that will shock the world. I will do no interviews. I will be magic. I will be a perfectionist, a researcher, a trainer, a master. I will be better than every great actor roped in one. I “must” have the most incredible training system to dig and dig and dig until I find. I will study and look back on the whole world of entertainment and perfect it, take it steps further from where the greatest left off.” 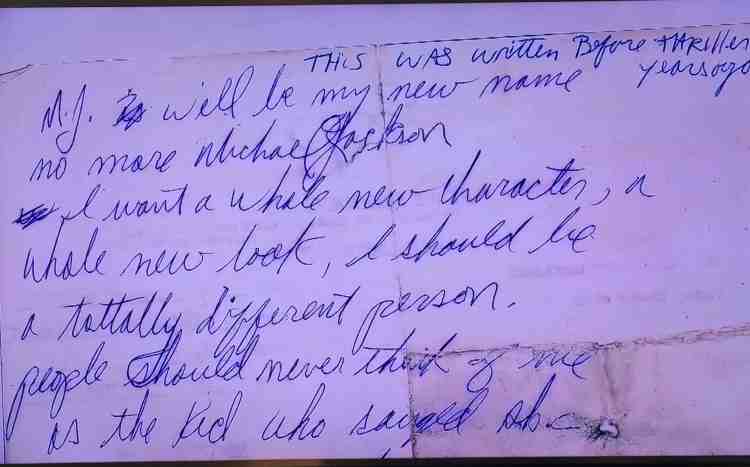 Gives you chills doesn’t it? Yeah. Me too. Whether his music is your cup of tea or not, there’s no dispute that Michael Jackson was a musical genius. Michael did shock the world, and lead the entertainment industry to a whole new level because he set his intention to do so, and he believed. He did what he loved, and the Universe responded. Boy did it ever!

Blog Beats: Off The Wall by Michael Jackson

Michael didn’t write the lyrics to the title track of the Off The Wall album, which is about overcoming obstacles and embracing your inner spirit, but he certainly embodied it in everything he did.

In the words of the King of Pop himself:

If you have a dream, write it down, and don’t ever stop believing! Not ever.

One thought on “Life Ain’t So Bad At All”